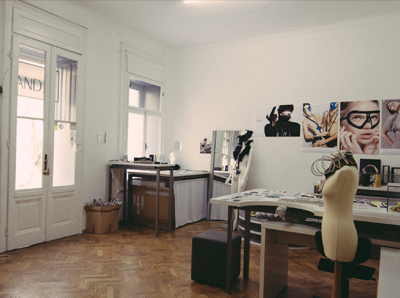 Trained as a goldsmith and sculptor, Andreas Eberharter began his career as an assistant to the renowned artists Anna Heindl, Manfred Wakolbinger and Eva Schlegel. Since 1992 he has been working as a freelance artist in Vienna. In 2001, Eberharter founded the label AND_i with which he has met worldwide success. Andreas Eberharter was named for numerous awards like the Vienna Fashion Awards (“best accessories designer” // 2010 and “best designer branding” // 2012) and the Mercur Innovation Award (“creativity” // 2011).

The participation of AND_i in the Thierry Mugler Men Show in 2009 attracted international attention. The eyepatch that Lady Gaga used in her video „Paparazzi“ soon became a cult object. Meanwhile the jewelry and accessories of AND_i are counted among the must haves of the international fashion scene, stars like Stars wie Milla Jovovich, Kiera Chaplin, Kesha, Kat Graham, Tarkan, Beyonce and Lindsay Lohan are amongst his fans.